…….   what a beneficiary can do to preserve their legal rights when:

* beneficiary rights are not being recognized

…….   how can a creditor to a trust or estate can collect

There are numerous different issues where a client may need help from an estate attorney in dealing with a dispute with another party.  The client may have substantial grounds to challenge a Will or a Trust.  Many of these challenges are based upon undue influence, or incompetency of the decedent.  Be aware that a competent person in many situations has the right to Will (or use a Trust) to whosoever they wish.  So to challenge an estate distribution created by a decedent you must have legal grounds to do so.  There must be legal grounds that show the person was not of sound mind, or that the person was unduely influenced.  Be aware that the decedent being influenced to make a particular estate distribution is NOT enough; the influence must be undue.  To find out whether the influence involved may have risen to the level to be undue influence, consult an attorney with experience in Wills, Trusts and Estates.

The other side of the coin is situations where an executor (personal representative) or trustee may be falsely accused that undue influence has occurred.  While some claims of undue influence or incompetency brought have merit, in other situations spurious claims have been brought.  Some clients find themselves in the position of defending against such claims.  Again the clients need to consult an attorney with experience in Wills, Trusts and Estates, so that the evidence and proof can be brought before the court to prove competency and lack of undue influence.

Disputes also arise in Estates and Trusts where a family member was included as a beneficiary, but some dispute has arisen during the conduct of the administration of the Estate or Trust.  Persons who administer and distribute estate and trusts, called Trustees or Executors, are subject to high fiduciary responsibilities under the law.  If you are a beneficiary and you think that such fiduciary responsibilities may have been breached seek help from a lawyer with experience in contested estate matters. 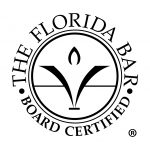 Board Certified in Wills, Trusts, and Estates